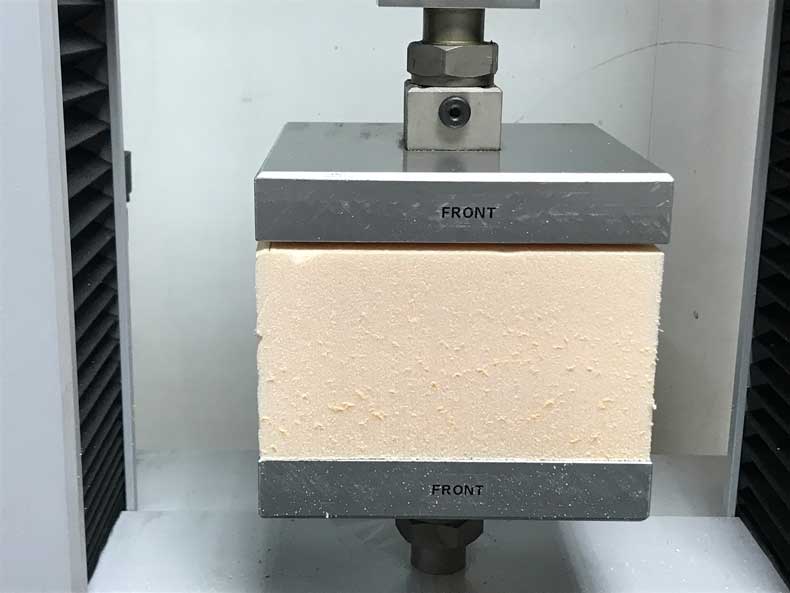 The compressive strength of ground floor insulation depends on the type of insulation material selected and the application in which a product is to be used. It must be capable of withstanding the loads that will be imposed on it, without any deformation of the floor.

The load-bearing capability of a floor build-up and the materials in it, including the required thickness of thermal insulation, should be assessed by a structural engineer if there are any doubts. The information in this blog post gives an overview of terminology associated with compressive strength, that may assist in specification decisions.

What is compression behaviour?

A material’s ability to resist the loads applied to it is assessed and declared by measuring its compression behaviour. The harmonised standards covering the manufacture of insulation materials specify the standard and test method that should be followed, and how a declaration should be made.

That method is described in EN 826 Thermal insulating products for building applications – determination of compression behaviour. As the name suggests, it applies to all insulation types. An insulation sample is placed between two plates of the testing apparatus, and a force applied.

The declaration either refers to the load that compresses the insulation by 10% of its thickness (relative deformation to the original sample thickness), or the load “at yield” (the point at which the material can be said to have failed before compressing by 10%).

An insulation material would never be used in a situation where it could compress by 10%; the consequences of that sort of movement could not be tolerated by the other materials in the floor build-up. As EN 826 says: “The method … may also be employed to obtain reference values from which design values can be calculated using safety factors.”

What is compressive creep?

Long-term loading generates a progressive compression that affects different materials in different ways. The long-term effect of applied loads therefore requires a different measure, known as compressive creep. Live/active loads that are temporary in nature do not cause the same ‘creep’ in compression as dead loads.

Compressive creep is tested by the method described in EN 1606 Thermal insulating products for building applications – determination of compressive creep. It requires a testing period from 122 days to 608 days, depending on the period of years being simulated – 10, 25 or 50 years. The loads applied to the tested samples are typically a percentage of the load determined in the EN 826 test.

Some manufacturers declare compressive creep as ‘compressive strength at 2% compression’ or similar, since the overall compression evidenced is typically around 2%.

What is the compression behaviour of XPS insulation?

Among widely available insulation materials, extruded polystyrene (XPS) insulation offers one of the broadest range of compressive strengths and is one of the few products where manufacturers invest the time to test and declare compressive creep.

This means it can be used in a wide range of domestic, commercial and industrial applications, including in wet environments such as below the damp proof membrane or on the outside of basement constructions.

For more information on specifying XPS insulation in a range of ground floor constructions, go into more depth with this blog post “Bearing the load: Floorboard Insulation”, or contact us to book the new Polyfoam XPS CPD seminar about the benefits of XPS as floor insulation.