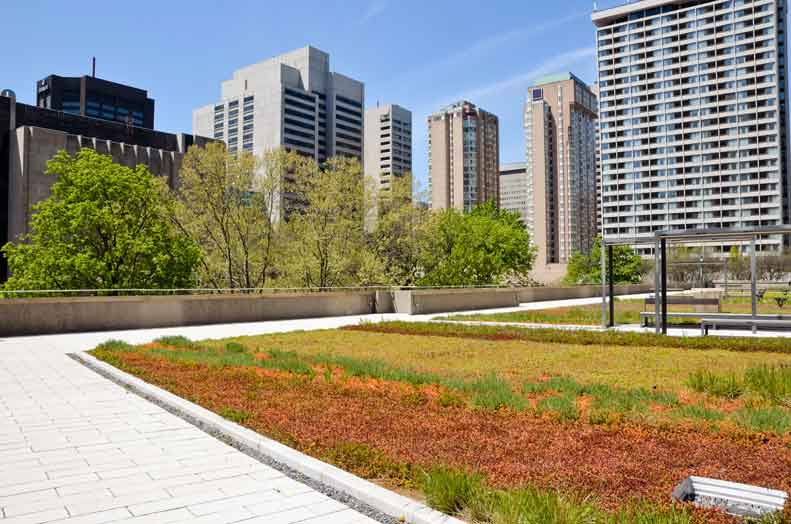 A blue roof is a flat roof construction – either a warm roof or an inverted warm roof – where additional elements are incorporated into the build-up to provide temporary control of the flow of rainwater during heavy rain. The aim is to provide a sustainable urban drainage solution (SUDS) on sites where other solutions are impractical.

Blue roof solutions are not water storage. Their aim is controlling the flow of water, by use of a restrictor, to avoid overwhelming the storm drainage on site and away from the site. Following rainfall, the rainwater should be successfully drained within 24 hours – although only the most extreme weather event would require a full day to drain.

This post focuses on inverted blue roofs, the covering of which can be gravel ballast, paving, or a green roof covering, just like a ‘standard’ inverted warm roof.

No British or European standard yet exists which deals exclusively with blue roofs. Over the last two or three years, a committee convened by the National Federation of Roofing Contractors (NFRC) drafted and published the NFRC Technical Guidance Note for the Construction and Design of Blue Roofs.

At the end of 2018, a revised version of BS 6229 Flat roofs with continuously supported flexible waterproof coverings – Code of practice was published, featuring recommendations relating to inverted blue roofs and some commonality with the NFRC Technical Guidance Note. However, the updated BS 6229 also appears to draw some of its own conclusions.

There are already concerns about the approach to inverted warm roof thermal performance in BS 6229, as we detail in this post. The current guidance on blue roof construction makes statements that are causing confusion within the flat roofing industry. Because no formal standard exists, there is no formal test method to determine how blue roofs behave.

As a result, there is a risk of different stakeholders seeking to undertake modified versions of existing tests to try and demonstrate the performance of a blue roof construction, with no joined-up approach to achieving a common conclusion.

Why is there confusion about inverted blue roof guidance?

In an inverted blue roof construction, the ‘attenuation zone’, or the part of the roof where a limited amount of water temporarily sits during heavy rainfall, is directly above the water control layer.

The water control layer is recognised as a drainage layer in its own right, but is not a waterproof layer. In a standard inverted roof, it significantly restricts the volume of water that moves through the insulation layer and reaches the waterproofed structural deck. The test that measures this water flow, however, is not considered appropriate to blue roof construction, due to the potential presence of a head of water that is not accounted for.

At face value, both the NFRC Guidance Note and BS 6229 are clear in what approach to take. The fx value used to correct for rainwater cooling should be 0.04 where square-edged insulation boards are used, and 0.03 when insulation boards with a profiled edge are installed.

BS 6229 goes further than the Technical Guidance Note, saying these fx values apply “irrespective of the covering” and “no correction to fx is permitted for inverted blue roofs”.

Insulation manufacturers supply inverted roof solutions with testing and third-party certification that allow a significant correction to fx, based on the standard water flow test. The confusion exists because those who work with blue roof systems on a daily basis feel the standard does not accurately represent the systems they supply.

How does a blue inverted roof actually perform?

In discussing the amount of water that will be present in the attenuation zone of a blue roof, the NFRC Technical Guidance Note says, “In reality, it is exceedingly unlikely that the roof will ever reach full capacity, as it will start to drain as soon as it starts to rain.”

This reaffirms how a blue roof is not a water storage solution. Even if the presence of a slight head of water was enough to cause some increased water flow through the water control layer and insulation layer, the waterproofing on the deck still provides secondary drainage as normal.

However, BS 6229 says, “the thermal insulation in inverted blue roofs is regularly saturated and therefore the roof system might remain permanently damp and not achieve the expected thermal performance.”

Blue roofing professionals believe this misrepresents how their systems perform.

What next for inverted blue roofs?

As with BS 6229’s criticisms around workmanship of water control layers, its approach to blue roof design does not seem to have been founded on a thorough evidence base. The typical design of blue roof attenuation zones is not reflected in BS 6229’s assumption of an ‘open roof covering’.

This is leading to a questioning of the published guidance, which is not helpful when the document is relied upon as an authoritative code of practice.

We are working with other organisations across the flat roofing industry, including members of the Liquid Roofing and Waterproofing Association (LRWA) and the National Federation of Roofing Contractors (NFRC) to collectively voice these concerns to ensure we are working with clear guidance that avoids ambiguity and we look forward to the issues outlined here being addressed at the earliest opportunity.