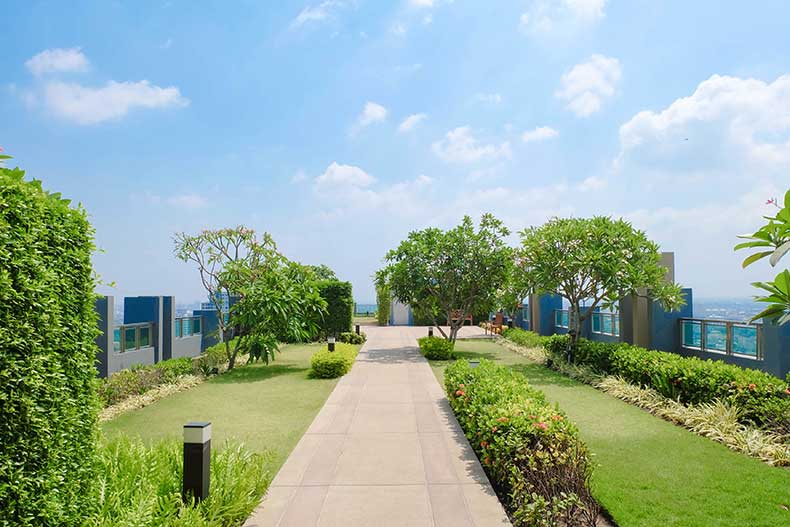 A green roof is a flat roof with a planted roof covering, and which can also provide biodiversity in some instances. Like a ‘normal’ flat roof construction, green roofs can be designed to require only maintenance access, or to act as amenity space with a significant level of foot traffic.

Inverted flat roofs are particularly well suited to green roof construction, and the use of extruded polystyrene (XPS) for the thermal insulation layer is well supported by national and European technical standards.

What are the different types of green roof?

As with many aspects of building design and construction, exact definitions of different green roof types can vary. The following are generally recognised as common variations of green roof build-up:

Intensive: a rooftop garden, designed to be fully accessible and enjoyed as amenity space. Requires irrigation, a relatively deep layer of growing medium, and a regular programme of maintenance to ensure it remains a healthy and usable public space.

Semi-intensive: falls somewhere between intensive and extensive roofs, in terms of cost, growing medium thickness, and required maintenance. Can incorporate elements of both, as well as featuring a greater range of planting.

Extensive: features a thin layer of growing medium. An extensive green roof is generally lighter and requires less maintenance than an intensive or semi-intensive roof. Sedum mats are an example of an extensive roof covering, and irrigation is not normally required once established.

Biodiverse: shares similarities to an extensive roof, but designed specifically to attract bird and insect life, using plants that create a specific habitat. Brown roofs are a type of biodiverse roof, but have fallen out of favour and a biodiverse green roof is seen as more effective.

What are the benefits of green roofs?

The primary benefit of a green roof is the ability of the planting to intercept rainwater, and the ability of the growing medium to retain water. The resulting naturally attenuated discharge of water from the roof can be used as part of a sustainable urban drainage system (SUDS). However, a green roof should not be confused with a blue roof.

The deeper the growing medium, the greater the reduction in rainfall run-off – though the extra load imposed by the water, in addition to the weight of growing medium and increased foot traffic, must be fully accounted for as part of structural calculations.

Green roofs make a usable roof space more attractive for the users, and for anybody overlooking, compared to a gravel or concrete covering. The planting and potential biodiversity of a green roof can be a welcome (if limited) relief from the density of urban development, and may even help to mitigate the heat island effect.

Credits can also be claimed for green roofs under assessment schemes like BREEAM. By their nature, these schemes only assess the building in isolation. For green roofs to have a meaningful impact on urban environments, policy-driven solutions tackling urban roofscapes as a whole are likely to be required.

The green roof market continues to develop, focused mainly on London – just under half of green roofs in the UK can be found in London. However, anecdotal evidence from roofing professionals suggests green roofs are often among the first victims of cost saving measures, leading them to be replaced with gravel or paved roofs and a few planters.

BS 6229, the code of practice for flat roofs with continuously supported flexible waterproof coverings, includes some guidance and recommendations relating to green roofs as part of its advice on flat roof construction generally.

In the UK, the Green Roofing Organisation (GRO) is facilitated by the National Federation of Roofing Contractors (NFRC), and supported financially by the NFRC, the Liquid Roofing and Waterproofing Association (LRWA) and the Single Ply Roofing Association (SPRA).

The GRO Code of Practice should be the first port of call for anybody seeking more detailed advice on green roofs, as there are no formal standards covering their design, installation and maintenance.

As a thermal insulation manufacturer, Polyfoam XPS are on hand to provide guidance relating to the use of our insulation boards in green roof build-ups. Contact us with any questions, find out which of our products we suggest for green roofs, and keep an eye on our blog for up-to-date information on all current industry issues.